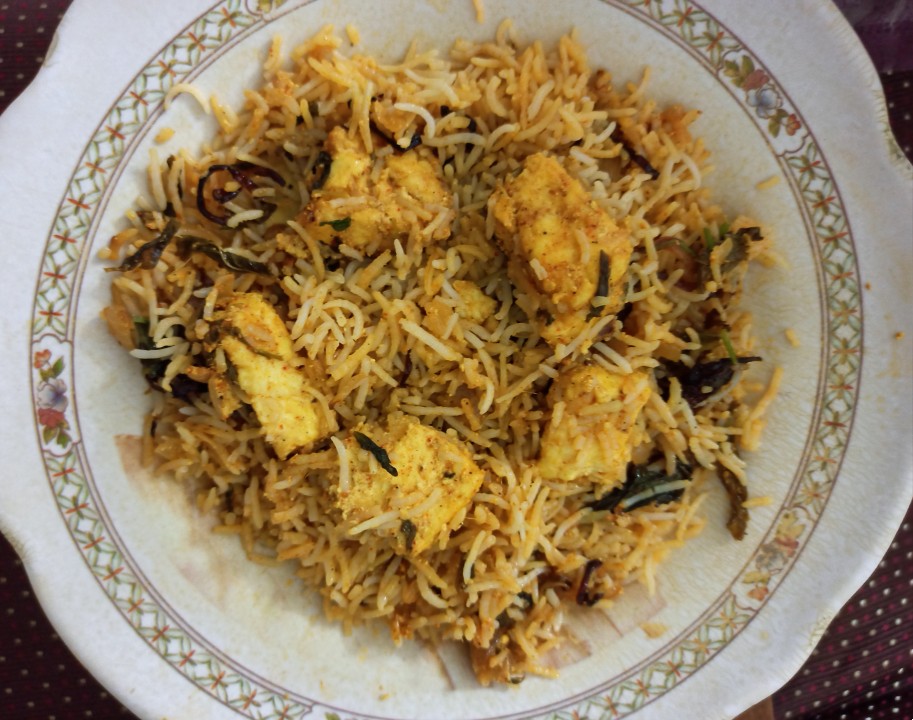 Paneer is made by curdling milk with a fruit- or vegetable-derived acid, such as lemon juice. It has a mild, milky flavor and a dense crumbly texture that goes beautifully well with strong spicy flavors used in many classic Indian dishes.

The process can be a little long but the outcome is worth the effort. In this paneer dum biryani recipe, ingredients used in the making is similar to other biryani recipes so if you are used to preparing biryani, this recipe prep and process will be a cakewalk but new cooks, this might be a little tedious.

To make easy paneer biryani, you can directly add the marinated paneer or deep fry them before adding them in the gravy.

Enjoy the dish with brinjal gravy or raita!

How to make paneer dum biryani at home

The first step to make paneer dum biryani is to keep the rice cooked and ready. Take a pan or cooker and add 4 cups of water to it. Along with it add soaked basmati rice, spices like bay leaf, cardamom, cinnamon, and clove.

Finally, add salt and mix it all well and cook in medium flame for 3 to 4 minutes. Don’t overcook the rice, keep it to 70 percent.

When the rice is 70 percent cooked, filter the excess water, and keep it aside.

Next, prepare the fried onions used during the layering process. Heat the pan and add 4 tbsp of oil. Add one medium-size onion vertically cut to it and fry till the onion turns brown and crispy.

The next step is to cook the biryani gravy. Start with using the same pan used for deep frying onions. Make use of the rest of the oil.

Add the spices like bay leaf, cardamom, cinnamon, star anise, clove, black stone flower, dried kapok bud, and saute them in the oil. Next, add chopped onion and cook until the onion turns translucent and add green chilli to it.

Once the onion is cooked, add ginger garlic paste and cook till the raw smell goes away. And then add coriander and mint leaves. Mix them all well and saute them for a few minutes. Next, add all the masala mentioned in the ingredients like Kashmiri chilli, black pepper powder, turmeric powder and garam masala.

Next, add lime juice and mix well. Finally all curd and salt. Mix it all together and close the lid and cook till oil separates from the gravy. Cook for 5 minutes in medium flame.

Now add paneer and mix it with the gravy. Next close and cook for 2 minutes in medium flame. Paneer biryani gravy is read.

The final step in the paneer dum biryani process is layering. Spread the cooked rice evenly over the gravy and make a layer. On top of the rice, layer add coriander and mint leaves along with fried onion, butter and some garam masala to make another layer.

For dum, place a bowl full of water on top of the closed pan/cooker to keep the steam sealed. Now cook the biryani for 5 minutes in medium flame.

After 5 minutes, remove the bowl of water and open the lid. Delicious paneer dum biryani is ready to serve.

How to make paneer dum biryani at home Video recipe:

How to make paneer dum biryani at home recipe card: 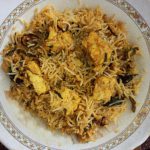 Hot and spicy paneer biryani is ready to serve